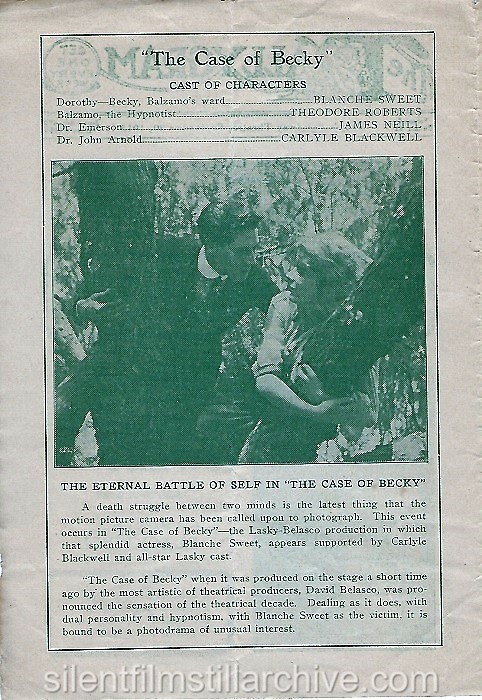 THE CASE of BECKY
CAST OF CHARACTERS

THE ETERNAL BATTLE OF SELF IN "THE CASE OF BECKY"

A death struggle between two minds is the latest thing that the motion picture camera has been called upon to photograph. This event occurs in "The Case of Becky" -- the Lasky-Belasco production in which that splendid actress, Blanche Sweet, appears supported by Carlyle Blackwell and all-star Lasky cast.

"The Case of Becky" when it was produced on the stage a short time ago by the most artisticc of theatrical producers, David Belasco, was pronounced the sensation of the theatrical decade. Dealing as it does, with dual personality and hypotism, with Blanche Sweet as the victim, it is bound to be a photodrama of unusual interest. 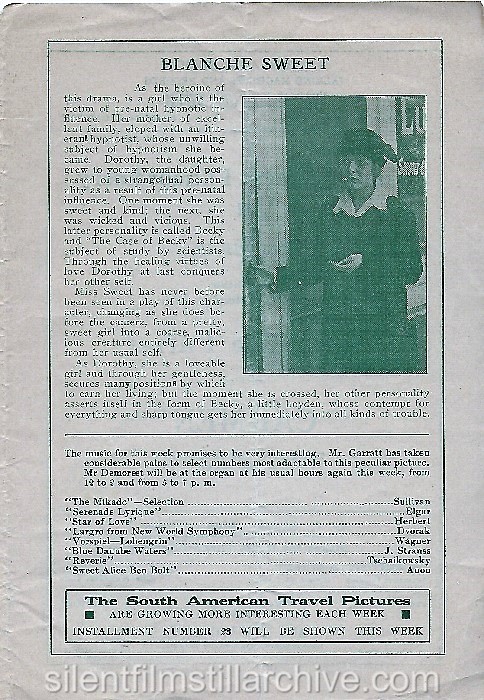 As the heroine of this drama, is a girl who is victim of pre-natal hypnotic influence. Her mother, of excellent family, eloped with an itinerant hypnotist, whose unwilling subject of hypnotism she became. Dorothy, the daughter, grew to young womnhood posessed of a strange dual personality as a result of tis pre-natal influence. One moment she was sweet and kind; the next, she was wicked and vicious. This latter personality is called Becky and "The Case of Becky" is the subject of study by scientists. Through the heling virtues of love Dorothy at last conquers her other self.

Miss Sweet has never before been seen in a play of this character, chaging as she does before the camera, from a pretty, sweet girl into a coarse, malicious creature entirely different from her usual self.

As Dorothy, she is a lovable girl and through her gentleness, secures many positions by which to earn her living; but the moment she is crossed, her other personality asserts itself in the form of Becky, a little hoyden, whose contempt for everything and sharp toungue gets her immediately into all kids of trouble.

The music for this week promies to be very interesting. Mr. Garratt has taken considerable painsn to select nubers most adaptable to this peculiar picture. Mr. Demorest will be at the organ at his usual hours again this week, from 12 to 2 and from 5 to 7 p.m.

VICTOR and EDISON
TALKING MACHINES AND RECORDS
Used in this Theatre are Furnished by
THE MUSICAL RECORD CO.
Phones Main 7994 F 2720          814 SOUTH BROADWAY

THE PHOTOPLAY SENSATION OF THE YEAR

The Tally's Broadway Theatre at CinemaTreasures.com