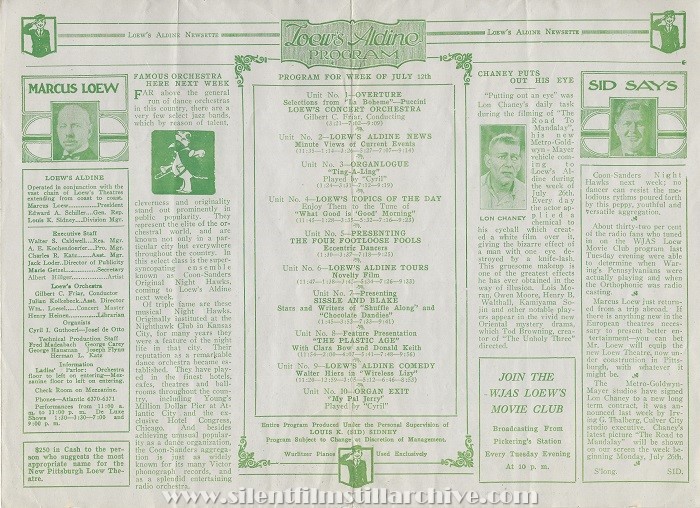 LOEW'S ALDINE
Operated in conjunction with the vast chain of Loew's Theatres extending from coast to coast.

$250 in cash to the person who suggests the most appropriate name for the New Pittsburgh Loew Theatre.

FAR above the general run of dance orchestras in the country, there are a very few select jazz bands, which by reason of talent, cleverness and originality stand out prominently in public popularity. They represent the elite of the orchestral world and are known not only in a particular city but everywhere throughout the country. In this select class is the super syncopating ensemble known as Coon-Sanders Original Night Hawks, coming to Loew's Aldine next week.

Of triple fame are these musical Night Hawks. Originally instituted at the Night Hawk club in Kansas City, for many years they were a feature of night life in that city. Their reputation as a remarkable dance orchestra became established. They have played in the finest hotels, cafes, theatres, and ballrooms in the country, including Young's Million Dollar Pier in Atlantic City and the exclusive Hotel Congress, Chicago. And besides achieving unusual popularity as a dance organization, the Coon-Sanders aggregation is just as widely known for its many Victor photograph records, and as a splendid entertaining radio orchestra.

PROGRAM FOR WEEK OF JULY 12th

Entire Program Produced Under the Personal Supervision of LOUIS K. (SID) SIDNEY
Program Subject to Change at Discretion of Management.

CHANEY PUTS OUT HIS EYE
"Putting out an eye" was Lon Chaney's daily task during the filming of "The Road to Mandalay", his new Metro-Goldwyn-Mayer vehicle coming to Loew's Aldine during the week of July 26th. Every day the actor applied a chemical to his eyeball which created a white film over it, giving the bizarre effect of a man with one eye destroyed by a knife-lash. This gruesome makeup is one of the greatest effects he has ever obtained in the way of illusion. Lois Moran, Owen Moore, Henry B. Walthall, Kamiyama Sojin and other notable players appear in the vivid new Oriental mystery drama, which Tod Browning, creator of "The Unholy Three" directed.

Coon-Sanders Night Hawks next week; no dancer can resist the melodious rythms (sic)poured forth by this peppy, youthful and versatile aggregation.

About thirty-two per cent of the radio fans who tuned in on the WJAS Loew Movie Club program last Tuesday evening were able to determine when Waring's Pennsylvanians were actually playing and when the Orthophonic was radio casting.

Marcus Loew just returned from a trip abroad. If there is anything new in the European theatres necessary to present better entertainment -- you can bet Mr. Loew will equip the new Loew Theatre, now under construction in Pittsburgh, with whatever it might be.

The Metro-Goldwyn-Mayer studios have signed Lon Chaney to a new long term contract it was announced last week by Irving G. Thalberg, Culver City studio executive. Chaney's latest picture "The Road to Mandalay" will be shown on our screen the week beginning Monday, July 26th.

The Loew's Aldine Theatre at CinemaTreasures.com